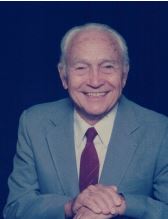 Known as Woody, he was born in Dublin, Mississippi and grew up in Sorrento, Illinois, the second of three children.

Woody served in the Navy for 30 years, as a ship-board radioman, as a “Silver Eagle” pilot, Pensacola flight instructor, flight squadron commander, and anti-submarine warfare strategist, before he retired in 1966.

After moving his family to Largo, FL, he began 20 years of employment with the City of St. Petersburg building a variety of technological innovations to meet the city’s communications needs. Fulfilling his life-long love of Amateur (HAM) Radio, he served in many local radio clubs and networks. Woody’s first call issued in 1935 was W9VPW. Woody also held calls: K6ORD and W9SYN.

He was married 72 years to his beloved wife Fannie, known as Fran, K4RXO, who predeceased him in 2019.Together they travelled the world, visiting every continent except Australia, including Antarctica. He loved life and had a great sense of adventure. With his love of boating, he frequently served as “committee boat” for the local sailing races and other special boating events.

Originally licensed as WN2JTL in 1968. License and interest lapsed until 1984 when relicensed as N2ESP. I currently hold an Extra class license and a BSEE from the Florida Institute of Technology. I am past President of the St. Petersburg Amateur Radio Club (SPARC) and trustee of W4TA, the club’s contest station. I’m also a member of Florida Contest Group, an ARRL Volunteer Examiner, member of the ARRL A-1 Operator Club, frustrated DXer, 10-10 member (40586) and charter member of the Radio Shack Battery of the Month Club. Station QTH is a small island (USi: FL285S Coquina Key) on the shores of Tampa Bay (Pinellas County / EL87qr). Station consists of an Elecraft K3/P3 (100W) into a ZeroFive GP-1040 Vertical/Ground Plane or an 80M Horizontal Loop. QSL via LoTW.