the SPARC Club has 3 repeaters: 2M, 70CM, and 220MHz. All amateur users are welcome to join us. Programming information is below. there are daily and weekly nets which are well attended and a great way to chat with local amateur operators from the area. 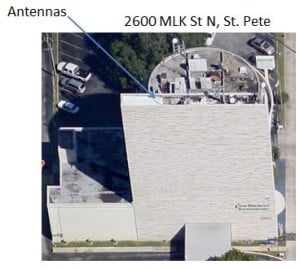 History of the SPARC Repeaters

The 2 Meter SPARC repeater on 147.060 MHz first signed on the air in 1974 under the guidance of Woody Huddleston, K4SCL using call sign WR4ALM. It was located at the St. Petersburg Fire Department Administration building, 150 ft. up the fire department tower. The equipment in use was GE Progress line, all tubes.

The repeater was later moved to the St. Petersburg Times radio tower, almost 300 ft. above ground. The added height added coverage, and the repeater was easily heard in Weeki Wachee, 50 miles away. Some years later, lawn mowers at the Times’ plant cut a guy wire and toppled the tower. The Times opted to not replace the tower, and the SPARC repeater moved to the “300 Building” on 34th Street, losing the beautiful signal coverage, as the antenna was back down near 175 ft.

Subsequently, the repeater was moved to the Bayfront Medical Center, losing even more altitude. Due to helicopter operations, the hospital requested we clear the roof, and the repeater was again on the move. In 1986 it was moved to the present location on the Skyline Building with the antenna back up at 175 ft. This unobstructed site services the area quite well, as it is farther north than the old hospital location.

While at the hospital location Woody introduced the 220 MHz machine. And after moving to the Skyline Building the 440 MHz machine was introduced. All three repeaters now provide excellent coverage for lower Pinellas County, reaching east into Hillsborough and south into Manatee and Sarasota counties.

Over time, the equipment has been updated as follows: 2M is GE Master Pro, all solid state, the 220 MHz is all solid state, using a Midland 13-509 for receive and a Clegg FM-76  for transmit with a linear amp on transmit. The 440 MHz is a GE MASTR II, which was donated by WTSP, has been online since early 2013.  All repeaters have pre-amps on the receivers.

In May of 2017, the 30 year old jury-rigged 220MHz repeater was updated. The old receiver was a Midland 13-509; the old transmitter a Clegg FM-76. Both the transmitter and receiver were the same inside, just different front panels. These radios were replaced by a new state of the art Bridgecom BCR-220 repeater.

The 220MHz repeater as well as the 2M and 440MHz GE MASTR II repeaters are interconnected to and controlled by an Arcom RC-210.

K4SCL, Woody was the original trustee and the “daddy” of the SPARC repeaters on 2M and 220 MHz. He remained trustee until March 31, 1986. On that date WA4AKH (SK), Emmett West became trustee. Upon Emmett’s passing, SPARC obtained Emmett’s call sign for use on the repeater in his honor. Ron KP2N (SK) maintained the repeaters as trustee for many years, and now the torch has been passed to Billy Lockwood KN4LUZ

We invite you to use all the repeaters when you are in the area.